In the Mirage continuity, T'Zirk's Terrors are an elite squadron of t'jat uhasil-trained stealth commandos serving the Triceraton Republic. Their leader is Captain T'Zirk, and they are stationed aboard T'Zirk's spaceship the Kaitoxa. All members of the squadron are Triceratons except for their newest member, Michelangelo from Earth.

The story of how Michelangelo met and joined T'Zirk's Terrors is a complicated one. Weeks before, while working for the Utroms as a tour guide for alien tourists on Earth, Mike was assigned to the Styracodon Regenta Seri and her entourage of royal guards. Feeling adventurous with an attractive alien woman, Mike and Seri ditched Seri's guards and went on a leisure tour up New England's coast on Casey Jones' borrowed motorcycle, which ended in a one-night-stand which resulted in Seri conceiving and laying the eggs of their children together that very night. When the guards caught up with them, Seri seemingly abandoned Mike to be seized by the guards, who then smuggled him off-world to a Styracodon extrajudicial prison on an alien world, where Mike was imprisoned, tortured and starved for weeks. Mike's only friend was Azokk, a Triceraton inmate. Seri visited the prison, but would not acknowledge Michelangelo's presence, leaving him feeling betrayed. Azokk decided to help Mike escape the prison, but Azokk died in the process. Mike wandered an alien world's countryside on the run until he stumbled onto T'Zirk and his Terrors hiding in a military duckblind. They had been there to rescue Azokk, who had actually been a Triceraton diplomat who sought peace with the Styracodon government years ago, but had gone missing. Upon learning of Azokk's mission, T'Zirk aborted the mission and retreated back to their spaceship, the Kaitoxa. After Mike gave testimony in a Triceraton court of his experience, the Triceraton Republic declared a war of extermination against the Styracodons, and Mike enthusiastically joined the Terrors, wanting revenge against Seri and her kind and for what happened to Azokk.

Since Mike joined them, T'Zirk's Terrors have been on the front lines of the genocidal war campaign, wiping out the populations of entire Styracodon-inhabited worlds and hunting down and killing the survivors down to the last civilian. But Mirage TMNT volume 4 has since ceased publication, and the story has not been resolved past this point. 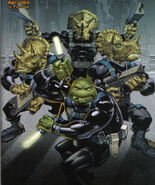 Add a photo to this gallery
Retrieved from "https://turtlepedia.fandom.com/wiki/T%27Zirk%27s_Terrors?oldid=482521"
Community content is available under CC-BY-SA unless otherwise noted.