It is not known under what circumstances the synthezoids were formed or whether they were created during or after the apocalyptic impact of the Mutagen Bomb. However, it can be assumed that they must have originated, at least in part, from a mixture of mutagen and petroleum.

It is also not known how they came under the control of Maximus Kong and to what extent he was responsible for their creation. However, they willingly serve him as auxiliaries when his war car alone is not enough against an opponent. However, because of their cuddly body structure they are extremely sensitive to any attack and can be destroyed in a single powerful strike. 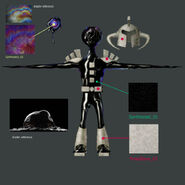 Retrieved from "https://turtlepedia.fandom.com/wiki/Synthezoid?oldid=483767"
Community content is available under CC-BY-SA unless otherwise noted.