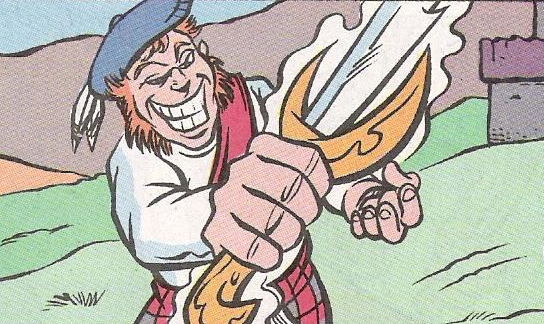 The Sword of Destiny once belonged to a Plutonian warlord. In the late 1690s, the warlord was shot down by a pursuer who wanted this sword, Krang. The sword had the power to turn one's mental aggression into a nuclear particle beam. The sword disappeared onto the planet Earth and Krang was unable to recover it.

In Scotland, a woman named Elan found the sword and gave it as a gift to the man she was in love with, Sandy MacNeil. Sandy, however, possessed a violent heart, and took advantage of the sword's power to fell his enemies. Elan realized her error and slipped into Castle MacNeil to steal it, but was found by Sandy and she was stabbed to death with the sword.

In present day, the Ninja Turtles, Splinter, and April O'Neil visit April's uncle Tam MacNeil at Castle MacNeil. This so happens to be the same time in which Krang and Shredder attempt to finally locate the sword and recover it.

A battle ensues between the Foot Clan and the Turtles, Splinter, and April. The ghost of Elan leads April to the sword, which is found in the clutches of Elan's skeleton. Elan tells April that her pure heart will allow her to wield the sword virtuously, and she attacks Shredder and Krang with the sword. Shredder takes Splinter hostage in exchange for the sword, and April throws the sword into the Loch Ness. Taking advantage of the distraction, Splinter then throws Shredder with a seoi nage into Krang and both of the villains fall out of the castle window and into Loch Ness, themselves.[1]

Retrieved from "https://turtlepedia.fandom.com/wiki/Sword_of_Destiny?oldid=468252"
Community content is available under CC-BY-SA unless otherwise noted.