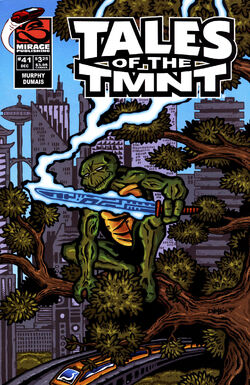 Swan Song is issue #41 of Tales of the TMNT volume 2, published by Mirage Studios in December 2007. It references the story of Dreams of Stone, and is the story of Leonardo and Radical's future life. This issue also includes a backup story, Fathers and Daughters.

The story is narrated by Leonardo. He appears as an elderly bodhisattva wearing a kimono and kasa, with his pair of katana mounted on his back.

A younger Leonardo and Radical are in the American Southwest, holding hands and basking in the beautiful desert landscape.

Leo and Radical look into each other's eyes.

Leo and Radical share a tender kiss. They return to their campground, share a peaceful evening by their campfire, and finally they spend the night together in their shared tent with one of Leo's katana staked just outside the entrance.

Leo and Radical visit the neon buffalo in rural western Massachusetts, which is now even more dilapidated with the ravages of time.

Leo and Radical visit the Jones Farm outside Northampton.

Leo and Radical are out in public on the crowded sidewalks of New York City, now populated by all manner of human and alien residents.

Two hands abruptly morph out of the brick wall the couple are standing next to.

Complete Carnage quickly grabs Radical by the head and neck as Leo reaches for his katana.

Carnage starts laughing sadistically as his form morphs back into the brick wall and disappears. Leo watches Radical slump over and fall down.

Radical lies motionless on the sidewalk.

Leo's eyes fill with tears and he cries out in anguish as pedestrians look on in shock.

Leonardo and his three brothers gather behind the neon buffalo. A humble cairn of rocks marks the final resting place of Raven Shadowheart.

Leo places a single rose at the memorial.

Leo visits the area outside the scene.

Leo looks at a sewer manhole.

Leo wades through the sewer, entering the building from a floor grate. Leo finds many human hostages ensnared by tentacles of living rock.

Complete Carnage's head and arms emerge from a nearby wall to confront the turtle.

Leo begins trying to free one of the humans.

Carnage sends a barrage of concrete bricks in Leo's direction.

Leo's left katana arm is swift, cutting down the bricks.

Leo and Carnage rush each other.

The two are embroiled in melee.

The two continue to exchange attacks, neither gaining an advantage over the other.

Carnage gleefully squeezes one of the hostages to death.

Once again in his life, Leo stands stunned and disturbed by the cold-blooded murder that has just happened in front of his eyes.

In a moment of pure wrath, Leo furiously rushes forward and slices Carnage vertically in two with his katana.

Afterward, Leonardo heads to the pier and tosses his pair of katana into the ocean along with their scabbards.

Leo wades into the water and removes his kimono, proceeding to wash himself.

Leonardo now appears much older even than before, greatly advanced in age. He sits in the lotus position on the grass in an urban park.

Leo, still in the lotus position, gets up my levitating into the air just off the ground. He picks up his bokken and starts walking.

Leo climbs the trunk of a tree, entering a humble treehouse on its branches. 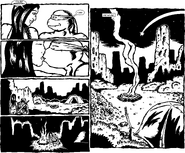 Leonardo is now a buddha.
Add a photo to this gallery
Retrieved from "https://turtlepedia.fandom.com/wiki/Swan_Song?oldid=560945"
Community content is available under CC-BY-SA unless otherwise noted.