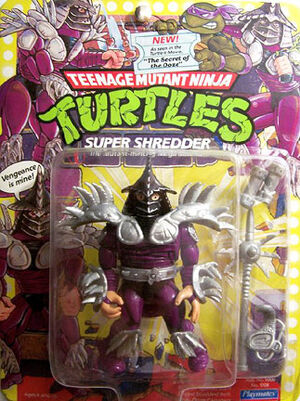 You thought the Green Guys took care of him in the first Ninja Turtle movie. But no! Now in "The Secret of the Ooze" Shredder's back! He's bad! He's mad! And he's oozed himself! He's Super Shredder - and he's out to bust up our boys! Glistening and not listening to reason, Super Shredder's got twice the Turtle-eating turbulence than the old simple Shredhead. Now he can use all his new menacing machinery to make mincemeat out of mutants who mess with him. Our Turtle Teens will have to stab through the steel of his atomized armor and dodge the sting of his spiked staff to do in Super Shredder! The Turtles will have to be super-sure of their skill before they take on the new and improved Super Shredder - 'cause this time he's ready! Are you?

Two rare variants were produced; one with a black suit, which was only available via a mail-in promotion for Chef Boyardee, and one with Purple Armor that was only released in Europe. The Purple Armor Super Shredder came in lighter and darker sub-variants. Purple Armor Super Shredder is a less sturdy figure than its standard counterpart, with most of the known figures having paint wear on the fingers; the armor is also made from a low stock of rubbery plastic which is easily blemished or cracked. 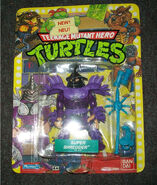 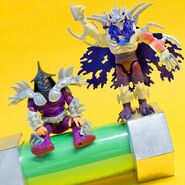 Add a photo to this gallery
Retrieved from "https://turtlepedia.fandom.com/wiki/Super_Shredder_(1991_action_figure)?oldid=499813"
Community content is available under CC-BY-SA unless otherwise noted.