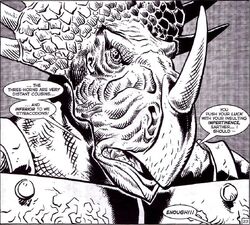 The Styracodons also called Styracis are a species of Dinosaur-like alien beings from the planet Nurgostu, that appeared in the Mirage comics volume 4 issues, as well as Tales of the TMNT vol. 2.

The Styracodon and Triceratons were longtime enemies, with a violent history even longer than the Triceraton had with the Federation. Their government is called the "Styracodon Imperium", and they are allied with the Protoceratons. Donatello discovered that the two species were actually divergent evolution lines stemming from the same base species.

Like the Triceratons, Styracodons are named after a real-world dinosaur species, the Styracosaurus. 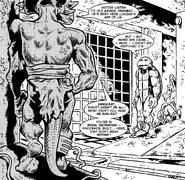 Mikey killing Styracodons.
Add a photo to this gallery
Retrieved from "https://turtlepedia.fandom.com/wiki/Styracodons?oldid=483714"
Community content is available under CC-BY-SA unless otherwise noted.