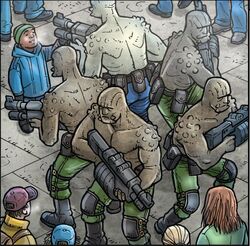 In the IDW continuity, the Stone Soldiers are an army of sentient humanoids from Dimension X whose bodies, as their name implies, are composed of stone. They were under the command of General Krang, which until Krang's defeat put them in conflict with the Turtles.

The Stone Soldiers' rock-hard skin was made possible by the Terrapin/Human Exo-Armor Synthesis, a technology developed for Krang at StockGen, an Earth-based biotechnology company owned by Baxter Stockman. Before the Turtles—Leonardo, Raphael, Donatello and Michelangelo—mutated, it was they as laboratory animals who made possible the development of the technology. The Soldiers who undergo the transformation process come from the ranks of Krang's humanoid army from Dimension X where they were given rock-like skin. Some in Krang's army have held the rank of elite troops, who are sent on attack missions to the forefront.

Retrieved from "https://turtlepedia.fandom.com/wiki/Stone_Soldiers_(IDW)?oldid=487336"
Community content is available under CC-BY-SA unless otherwise noted.