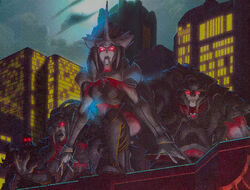 The Stone Generals are the chief enforcers of Yaotl's armies and brothers and sister in arms. Once human, they conquered the country of Paxmec along with Yaotl, but were cursed to become statues by the shaman Siba-Noor, while Yaotl was cursed with immortality. This effectively ended their conquest.

Thousands of years later, Yaotl, now known as business Maximillian Winters, hired April O'Neil to track down his generals and the Foot Clan to retrieve the Thirteen Monsters that had spread to the earth by Yaotl's hubris, in order to end his curse. After his generals were once again awakened, they helped retrieve the remaining monsters, but stopped short of the real goal, capturing Leonardo instead. This was intentional, as they wanted nothing more than to become immortal as Yaotl had. Yaotl, who had suffered with his immortality, refused to let this happen to his comrades. April, Casey Jones, and the Foot retrieved the final monster, as the Ninja Turtles, Splinter, and the rest of the Foot held off the Stone Generals. With the final monster returned, Yaotl and the generals finally found death.

Retrieved from "https://turtlepedia.fandom.com/wiki/Stone_Generals_(Movie_adaptation)?oldid=507638"
Community content is available under CC-BY-SA unless otherwise noted.