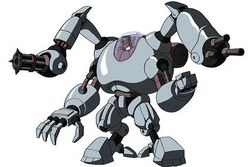 Stockman's Exo Suit is a high-tech exo-suit developed by Baxter Stockman in the TMNT franchise.

In the 2003 TV series three-part episode "Return to New York" Stockman used a Utrom technology based "Ultra-Cyborg" - suit in an attempt to take revenge on the Shredder, Hun and the Turtles. It also allowed him to compensate for his badly mutilated body.

In addition to the general abilities the suit also has extendable arms, an internal jet pack array to fly up from traps and falls, and is built from a self-healing polymer crilic, which fixes minor damage by itself. In addition, each limb is provided with its own internal back up power source - a design that Donatello ​​promptly exploited by using a severed arm of the suit and its weapons systems against Stockman.

Retrieved from "https://turtlepedia.fandom.com/wiki/Stockman%27s_Exo_Suit_(2003_TV_Series)?oldid=495860"
Community content is available under CC-BY-SA unless otherwise noted.