Stephen (variously pronounced /ˈstiː.vən/ or /ˈstɛf.ən/), also spelt Steven (/ˈstiː.vən/), or shortened as Steve (/ˈstiːv/), is the name of certain fictional characters in the Teenage Mutant Ninja Turtles multiverse, as well as the first name of various non-fiction people involved in production. 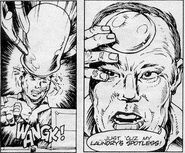 Stephen
Mirage
Add a photo to this gallery

Stephen
2003 TV series
Add a photo to this gallery

Retrieved from "https://turtlepedia.fandom.com/wiki/Stephen?oldid=338427"
Community content is available under CC-BY-SA unless otherwise noted.