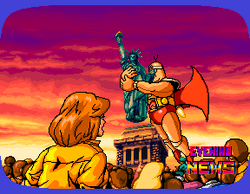 The Statue of Liberty is a statue on the Liberty Island outside New York City, given by France to the USA in 1886.

The thieving of the Statue of Liberty by Krang in Teenage Mutant Ninja Turtles: Turtles in Time is the main motivation of the Turtles to pursue him.

Shredder tries to blow it up in the Something Fishy Goes Down storyline in the Archie comics.[1]

Zog finds out in Dinosaur Seen in Sewers! that the statue was used as a Kraang base. He sets off a beacon from the statue to summon his Triceraton brethren, and fights the Turtles on it. At the end of the battle, Zog purposely plummets to his death from the edge of the statue's torch.

In the Out of the Shadows film, the turtles cheer their victory atop the Statue of Liberty by the end.[2]

Retrieved from "https://turtlepedia.fandom.com/wiki/Statue_of_Liberty?oldid=286346"
Community content is available under CC-BY-SA unless otherwise noted.