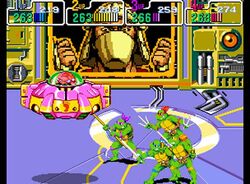 The Starbase is a spacecraft base owned by Krang in the year 2100 that functions as the penultimate stage in Turtles in Time. Outside the windows of the base, the landscape of a red planet or moon can be seen, with many more base-like objects on the horizon.

The Ninja Turtles are faced with Foot Soldiers, Stone Warriors, A6 Annihilators, and other robot enemies as they walk the corridors of the Starbase. Stage hazards include freezing floor panels, lasers, and giant metal balls.

At the stage's conclusion, Krang appears in a miniature spacecraft to fight the Turtles while Shredder watches from a Trans-Dimensional Portal. Upon Krang's defeat, the portal allows the Turtles access back to their home era (1991 in the arcades and Re-Shelled, 1992 on the Super NES).

Retrieved from "https://turtlepedia.fandom.com/wiki/Starbase?oldid=485186"
Community content is available under CC-BY-SA unless otherwise noted.