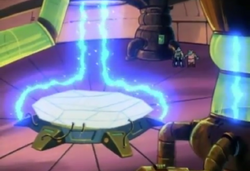 Shredder attempts to steal it so that he can energize the Technodrome, but he requires the help of the Atlantean guards due to the gem's large size. Luckily for him, Bebop had been crowned the king of Atlantis, and told the guards to do so. Subsequently Alim Coelacanth and the Turtles managed to retrieve the Star from the Technodrome and return it to Atlantis.

The Star also energizes the Hammer of Atlantis, the city defense system, which is composed of giant laser-shooting towers around the city.

Add a photo to this gallery
Retrieved from "https://turtlepedia.fandom.com/wiki/Star_of_Atlantis?oldid=451396"
Community content is available under CC-BY-SA unless otherwise noted.