---- This is a disambiguation page — a navigational aid which lists other pages that might otherwise share the same title. If an article link referred you here, you might want to go back and fix it to point directly to the intended page. ----

Squirrelanoids are mutant squirrels and enemies of the Ninja Turtles with a decidedly alien-esque appearance. They were inspired by the Pizza Monsters from the 1987 TV series, which were, in turn, inspired by H.R. Giger's designs for the xenomorphs from the film Alien. 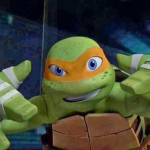