Start a Wiki
Splinter in the Coming Out of Their Shells tour makes a few appearances during the concert. He comes out during the instrumental introduction to his song “Skipping Stones”, explaining how rings in the water ripples are like people’s emotions can spread. The story leads right into the song.

The other time we see Splinter when the turtles are forced to retreat due to the De-Harmonic Convergence Converter that steals music (and coincidentally can suck the life force from the turtles and Splinter), Splinter tries to keep the turtles calm and collected until Raphael lashes out at him. Then makes a final appearance as well as most of the cast during the song on "Count On Us" as a finale to the show.

Splinter's “Skipping Stones” is also found on the studio soundtrack. Splinter is voiced by Mark Enis for both the concerts and studio recordings. 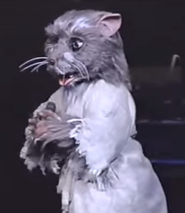 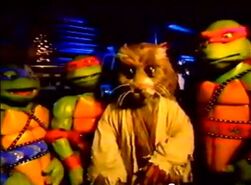 Add a photo to this gallery
Retrieved from "https://turtlepedia.fandom.com/wiki/Splinter_(stage_show)?oldid=487738"
Community content is available under CC-BY-SA unless otherwise noted.