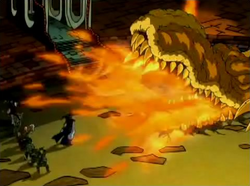 The Spirit Forge is a mystical hearth that grants mystical weapons to whomever is worthy. It's appearance is that of the top half a dragon's head with a clawed hand at each side. When its jaw opens, it is able to breath out a continuous fire. This fire is harmless to those who are "worthy", and to those not, "inexplicable pain". The one disputed case is when Leo put his hand to the fire, but it burned out, and he was left with no weapon. When Leo asked Juto-Shisho of what that meant he received no answer. Eventually it was reveal the sword Gunshin that Faraji Ngala wielded was always meant for Leo to have. It could be possible the Spirit Forge sensed Leo as a worthy candidate for Gunshin, Faraji's sword, but did not give him the weapon outright because he didn't think he was worthy and was waiting for him to discover that for himself. Another possibility is that since Leo forged his own swords after his battle against the Foot Elite, the Forge felt that he didn't need a special weapon.

Retrieved from "https://turtlepedia.fandom.com/wiki/Spirit_Forge?oldid=593519"
Community content is available under CC-BY-SA unless otherwise noted.