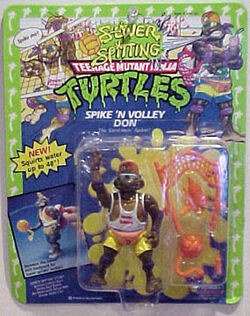 Spike ‘n Volley Don is never off-sides when he’s spit-spikin’ down the Foot Clan on local sand. Always prepared for a game with his bo poles and ninja net, Don’s the dude on the beach. And if the Foot Clan gets under his skin, he’s ready with his fully loaded suntan lotion gun (it makes you squirm, not burn) and his trusty volley ball bomb (it’s a blast). This beach bum ball bouncer plays hard and parties harder. He’s a real Turtle team player – he’ll dive, volley, dig, dance and even side-out, as long as they’re playing for pizza, that is. So feel free to take in some rays and watch Spike ‘n Volley Don spike and spit. He’s good. He really is.

Retrieved from "https://turtlepedia.fandom.com/wiki/Spike_%27n_Volley_Don_(1992_action_figure)?oldid=468137"
Community content is available under CC-BY-SA unless otherwise noted.