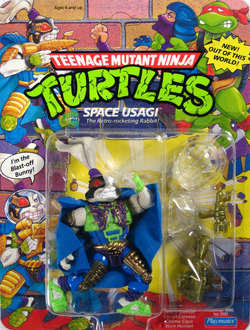 Far out! It's Space Usagi, the galactic good guy and retro-rocketing rabbit! He's gone where no bad boy bustin' bunny has gone before. We're talkin' 'bout space, the final fronthare! Draped in his cape, from which he derives his keen sense of the Universe, Space Usagi orbits orbs, passes planets and conquers cosmic criminals with the help of Raph, the Space Cedet! The sinister spaced-out Shredder doesn't stand a chance against Space Usagi's warp drive weapons. Listen for the inaudible blasts of the celery silencer! Watch for the glow of the radiated recoil from Usagi's cosmic carrot cannon! And always remember, in space no one can hear you crunch!