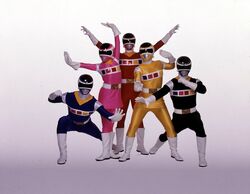 The Space Rangers are the protagonists of the 1998 television show "Power Rangers in Space". The team consisted of a human alien leader and most of the cast of the previous season, Power Rangers Turbo, as well as later on, a sixth member.

Save Our Ship and Shell Shocked were a two episode crossover between Power Rangers in Space and Ninja Turtles: The Next Mutation, which were both produced by Saban Entertainment at the time. It was the first official meeting between the two franchises, although it certainly was not the last.

Retrieved from "https://turtlepedia.fandom.com/wiki/Space_Rangers?oldid=518880"
Community content is available under CC-BY-SA unless otherwise noted.