After the Creep reformed in Donatello's lab, he found Snakeweed's claw and pumped Mutagen into it, creating a second Snakeweed. It battled the Turtles across the rooftops until it and Creep were destroyed by April in the Shellraiser. However, the two mutants' remains had slumped together in a pile, forming one creature, Creepweed. 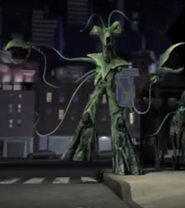