Start a Wiki
Slug was a human thug that only appeared in the UK-published Teenage Mutant Ninja Turtles magazine. He carried a sledgehammer and broke into various buildings to rob them. He then flung slugs as his calling card. After robbing Mr. Murakami, he broke into a Kraang warehouse as the Turtles were fighting and attacked them as well. He busted some Mutagen and got it on him, transforming him into a giant, purple slug. He tried to attack the Turtles after this, but he was so incredibly slow that he couldn't even get close to them. They simply walked away from him, leaving him to "chase". 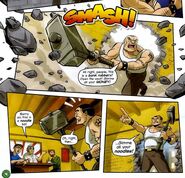 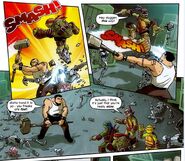 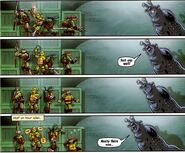 Add a photo to this gallery
Retrieved from "https://turtlepedia.fandom.com/wiki/Slug_(Panini)?oldid=493599"
Community content is available under CC-BY-SA unless otherwise noted.