Late one night, Sloane meets up with Shadow, who had snuck out from her uncles and grandfather's home to attend a clandestine Lilith concert with her. At the concert, while Lilith is singing, the concert attendees pass around goblets of a mysterious drink. Sloane drinks, but Shadow hesitates, and still hasn't drunk when Lilith, Sloane and most of the concert goers begin transforming into werewolves. Shadow's uncle Raphael comes to get Shadow, hands her a weapon, and the two trained ninja fight their way out. Shadow is disturbed when one of the werewolves she stabs turns back into the naked human form of her friend Sloane, who then dies before her eyes. The werewolf Lilith carries off Sloane's body and promises revenge against Shadow for the death of her pack mate. 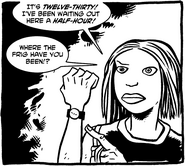 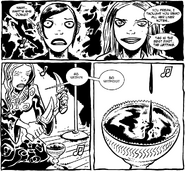 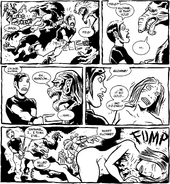 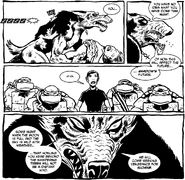 Add a photo to this gallery
Retrieved from "https://turtlepedia.fandom.com/wiki/Sloane_(Mirage)?oldid=247186"
Community content is available under CC-BY-SA unless otherwise noted.