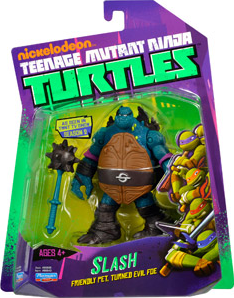 Once Raph's loyal pet turtle Spike, he mutated into a larger, craggier turtle named Slash. He has a spiked shell and a sharp beak. His strength and ninja abilities are faster and tougher than the Ninja Turtles, with intentions not as admirable. Slash tries to convince Raphael to leave his brothers behind. When he refuses, Slash becomes a foe rather than friend.

Slash in his packaging :)
Add a photo to this gallery
Retrieved from "https://turtlepedia.fandom.com/wiki/Slash_(2014_action_figure)?oldid=467063"
Community content is available under CC-BY-SA unless otherwise noted.