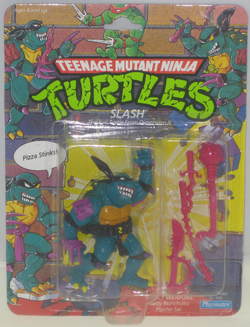 A 1990 action figure of Slash; The Evil Turtle From Dimension X!

In an attempt to fight fire with fire, Shredder created the perfect Turtle terror - a ninja nemesis from Dimension X named - Slash. This snarling, snapping mutant menace is the total opposite of our beloved Turtle teens. He's a crazed carnivorous cannibal who only eats tender Turtle tenderloin - even for breakfast!

This anti-Turtle teen slashes his way through the sewers on a maniacal mission of mass destruction. Armed with his Psycho Sai and one good eye, Slash skewers anything that's good and green. This mad monster hates everything the Turtles love: pizza, parties and pranks. Allied with Shredder, Slash won't rest until he's devoured our green Teens. His spiked knee and elbow pads and horned shell keep Slash a cut above the rest.

Slash is notable for having many released variants:

Retrieved from "https://turtlepedia.fandom.com/wiki/Slash_(1990_action_figure)?oldid=467061"
Community content is available under CC-BY-SA unless otherwise noted.