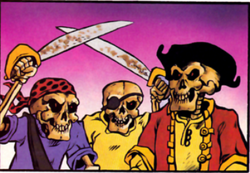 In the comic The Riddle of the Rusty Scupper, April and the Turtles are vacationing in the Caribbean, when they encounter a pirate ship called the Rusty Scupper. Checking it out for treasure, they find a note reading "Lift the curse by solving the riddle." A Skeleton Pirate captain on board the Scupper then tells them the riddle:

"What's black and white and red all over?"

The skeleton pirates then attack the Turtles and April, who make a few guesses as to the riddle's answer. April deduces that it must be something pirate-related, and it dawns on her when she sees it: the ship's Jolly Roger against the sunset. The captain thanks April and the ship disappears.

Retrieved from "https://turtlepedia.fandom.com/wiki/Skeleton_Pirate_(TMNT_Magazine)?oldid=450350"
Community content is available under CC-BY-SA unless otherwise noted.