A character coloquially referred to as Skateboarder or Skateboard girl is an incredibly minor but memorable pedestrian character in the first TMNT arcade game.

Approximately halfway through the second level, this woman zooms along the sidewalk on her skateboard, not giving a care to the duelling mutant turtles or ninja robots in her vicinity. If the player strikes her, she crouches on her board (while still moving forward), and shrieks, and the player is awarded a point just as if they had defeated any enemy in the game.

This same girl, or at least a reference to her, appears in Konami's 2003 WiiWare game, Contra Rebirth. In the introduction for the game's second stage, she is among a crowd of fleeing citizens, crouched on her board in the same stance as she is after she is hit in the TMNT game. Her sprite more closely reflects the NES version's, with red shorts. 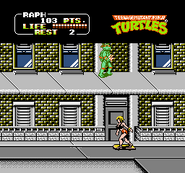 Add a photo to this gallery
Retrieved from "https://turtlepedia.fandom.com/wiki/Skateboarder?oldid=519918"
Community content is available under CC-BY-SA unless otherwise noted.