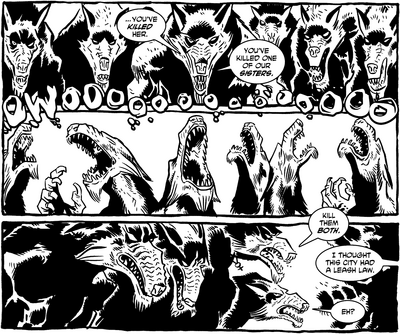 Not to be confused with the Brotherhood.

In the Mirage TMNT universe, the Sisterhood is a pack of all-female werewolves residing primarily at Lilith's Den in the city of Nocturna. Lilith is the Sisterhood's pack leader. The Sisterhood refer to one another as sisters, but they are not all related by blood, having originally been human girls who drank Lilith's blood to become part of her pack. The Sisterhood is central to the story Darkness Weaves and its sequel miniseries Raphael: Bad Moon Rising.

The Sisterhood first appeared in Darkness Weaves, having traveled with Lilith to New York City to ceremonially recruit new members at Lilith's bloodletting concert. Sloane drank Lilith's blood and became a member. They tried to add Shadow Jones to their ranks, but she was stopped from drinking the blood thanks to the interversion of Uncle Raphael and his brothers. In the chaos, Shadow accidentally killed Sloane in werewolf form, and Lilith and her Sisterhood swore revenge, forcing Shadow to leave New York and go into hiding at Jones Farm.

In Bad Moon Rising, Lilith and most of her werewolves were kidnapped by Lord Incubor, except for Lucrezia and the resurrected Sloane who were away from the den when the kidnapping occurred. In reality, Incubor, Sloane and Lulu's father Lord Chiton had secretly conspired to kidnap the Sisterhood and stage their rescue, recruiting Raphael and Shadow as unwitting pawns in their gambit, all to make Chiton look like the hero and make Lilith look like the unfit mother to manipulate their court child custody battle in Chiton's favor. Lilith survived intact, but her den had been all but destroyed, and her werewolves had been turned into zombies who could no longer lead normal lives. 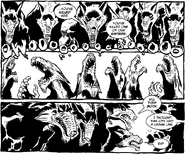 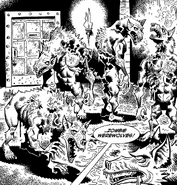