Sins of the Fathers, part 1

Sins of the Fathers

The Turtles are at their current home (April's parents' unused antique shop) playing Shapester, a Twister knock-off. Splinter sits in meditation, thinking on the Foot Clan, and what fighting them will entail. While the Turtles understand the seriousness of the situation, only Splinter grasps just how truly dire it is. He knows the Foot will not rest until they have destroyed them. Suddenly, Casey stumbles in, looking pretty rough. He tells them his dad had been drinking again and really went off on him. Raphael loses his temper and storms off to Casey's house, followed by Splinter. As Splinter leaves he passes April, arriving with donuts. April is upset over Casey's condition.

At Foot Clan headquarters, Karai is training. She takes out a whole group of Foot ninja, and Shredder orders her to do it again. Karai is disgruntled by the fact that the Shredder does not think her capable of leading the Foot, when she is the one who restored it from the state her father had left it in. Karai reminds Shredder that is was she who found the means to bring him back to life. The Shredder tells her if she thinks she's ready, attack him now and challenge him for leadership of the Foot Clan. She picks three Foot ninja and strikes at the Shredder, but he defeats them all easily. Shredder tells Karai that she was never fit to lead the Foot Clan, and she will always be a simple soldier, nothing more. The time has come for him to find a more suitable second-in-command.

At the antique shop, April tells Casey that he should have told her about the situation with his alcoholic, abusive father. He says he was too embarrassed but April says they're closer than that. The Turtles advise Casey to wear some protective gear next time he goes home.

On Burnow Island, Baxter Stockman groggily awakes, not knowing where he is. Stockman begins snooping around until he finds a room full of Utroms in stasis. Krang finds him and tells him the two have much to discuss, revealing that he is not of this world.

Casey's dad is watching T.V. at home when Raphael bursts in, out of control with anger. He begins to fight Casey's dad and is about to finish him off when Splinter arrives. Splinter tells Raphael that he fights with too much rage, and he will show him the true way of the ninja.

Cover RI by Valerio Schiti.
Add a photo to this gallery 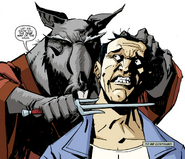 Retrieved from "https://turtlepedia.fandom.com/wiki/Sins_of_the_Fathers,_part_1?oldid=428496"
Community content is available under CC-BY-SA unless otherwise noted.