Sid Jones is the wayward cousin of Casey Jones, and an antagonist of Casey and the turtles.

Sid Jones was on the wrong track, had a penchant for gambling and had to resort to theft to keep his debt afloat. Finally, one day Sid appeared at his grandparents Northampton house with his buddies to search for money Sid believed was buried there by Casey's grandparents. At the time Sid appeared, April, Casey, and the Turtles were living there after a particularly brutal attack from the Shredder. Attempting to take over the house and find the money that was stashed there, he and his friends endangered the lives of April and the Turtles, Sid and his friends were repulsed by Casey and Turtles and rendered harmless, while Sid had to learn to his bitter disappointment that the treasure which he had so long been chasing like mad, no longer existed.

Later he would give his cousin and April trouble again, when he joined the Foot Clan and lead Karai and the Foot to the Jones Farm in Northampton, Massachusetts where they promptly ruined Casey and April's private engagement party. The ninja steal the ring in Casey's possession because Sid believes it to be the magical talisman that Karai is seeking. When the ring is discovered not to be the sought after object in the end, Karai ordered the Foot Mystics to punish him. The Mystics proceed to use various magical torture methods on Sid, but despite their best efforts, they couldn't kill him. He was cursed from then on to spend his days as a disfigured gnome in a cell of the Foot Headquarters. Clutching the ring, Sid realizes that it was never the Heartstone that granted immortality, but the ring-itself.

Sid's post-torture appearance is an homage to The Lord of the Rings' Gollum, specifically his cinematic incarnation. 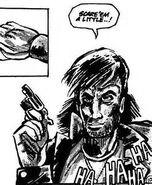 Add a photo to this gallery
Retrieved from "https://turtlepedia.fandom.com/wiki/Sid_Jones_(Mirage)?oldid=501473"
Community content is available under CC-BY-SA unless otherwise noted.