The final installment in IDW's villain micro-series. This issue sheds some light on Shredder's time in ooze-induced hibernation. Released on November 27th, 2013.

Oroku Saki, Karai, Kitsune, Hun, and other crime bosses are meeting to discuss their campaign to take over New York City. Karai reports that there has been no sign of the Turtles or Splinter in the past few days (following the events of City Fall Part Seven), and in the meantime the Foot Clan and all the gangs working for it have become more powerful. Karai admits that they have had some casualties, but she says that in war, everyone dies, or almost everyone, she adds, glancing at Shredder. Shredder ends the meeting and dismisses everyone. Kitsune remains behind, pointing out that every time someone mentions Shredder's immortality, he cuts them off. Shredder tells her that he chooses not to talk about it; Kitsune says that his unwillingness to talk about it could be seen as a sign of weakness. When Kitsune arranged the procedure to bond Shredder's soul to his body, she did not tell him where his soul would go, as she did not know herself. Kitsune asks the Shredder where he went during his long sleep, and he tells her.

Shredder tells Kitsune that when she performed the ritual to put him to sleep and bond his spirit to his body, he was sent to the land of the dead. Shredder fell into an endless ocean and scrambled to shore. As he emerged from the water, he encountered a small, mysterious figure, who knew that while everyone else was a permanent resident of this realm, Shredder was just passing through. The mysterious figure warned Shredder not to upset the natural order of the realm: he tells Shredder to let the others who live there to try and find peace, otherwise Shredder's life would be forfeit, no more resurrections, no more cheating death. Shredder asks the figure if he thinks he could take his soul. The mysterious figure explains that they would not have to take it, Shredder would give it to them.

Shredder, undeterred by the figure's warning, sets out for the large fortress in the distance, encountering many restless souls in the process. Shredder vowed that he would not share their fate, becoming a mere reflection of his former self. In his wandering he encountered groups of soldiers, hanging about listlessly as they no longer had a purpose. Shredder gave them a wide berth, as he had no quarrel with them. When he grew close to the great fortress, he was able to see that it was very heavily guarded, and he would not be able to gain entrance without a sizable distraction. So Shredder approached a group of soldiers, seeking to enlist them their help with the promise of glory in battle. As soon as he got near them, the soldiers attacked him. Shredder, being well-versed in various forms of combat, was able to figure out most of their weaknesses and overcome them. The soldiers fought mindlessly, without adjusting their strategy as necessary. However, their numbers were simply too great, and Shredder was forced off a cliff, injuring himself greatly in the process. As the soldiers moved to attack him again, Shredder realized that an appeal for victory would not work on them, they sought merely to fight for all eternity. Shredder calls for them to stop, and tells them that even if they did defeat him, they would end up back in the same place they had been: alone and without purpose. But if they chose to follow him, they could fight as an army against an endless onslaught of demons.

Having successfully organized the dead soldiers into attacking the fortress, Shredder slipped inside. The halls of the fortress had been emptied, all of the guards called outside to defend against the attack. Only the King was left on his throne. As Shredder approached, the King rose, slowly and unsteadily. The two engaged in brutal combat. Shredder recognized that the King was a formidable opponent, but his armor was bulky and his breathing heavy, signs of a warrior past his prime. Shredder adjusted his tactics accordingly, allowing the elderly King to tire himself out, until Shredder could strike a fatal blow. The King fell to his knees, proclaiming that he was so certain that he would rule this realm forever. He urges Shredder to finish him off.

Shredder threw the King's body down, proclaiming himself the new King of the realm. A group of demons gathered around, the small mysterious figure Shredder had encountered earlier at their forefront. The figure thanked Shredder and removed the dead King's mask, revealing it to be none other than Shredder himself, many years older. Shredder is startled, and asks how this is possible. The mysterious figure ridicules Shredder, asking if he really thought he was special, if he could cheat death forever. The figure tells Shredder what his future holds: he will lead armies, conquer the world, and remake it anew, into a land ruled by barbarian hordes and mutant freaks, and then, one day, he will die. Shredder will then conquer the afterlife, as he was destined to, but as time does not travel in a straight line in the afterlife, he will one day meet the only person who could defeat him—himself.

Shredder tells Kitsune that she knows the rest. Karai resurrected him, and although at first he had no memory of his doings in the afterlife, they slowly came back to him. Shredder says that yes, he has taken control of the city, but what is a city compared to eternity? Kitsune attempts to soothe him, saying that surely it was all a dream, simply his mind trying to teach him a lesson. She tells him that she is always there for him.

After Kitsune leaves, Shredder thinks to himself that she doesn't know the whole story. He didn't tell her that it wasn't just the hibernation, he sees his old, defeated self every time he goes to sleep, sometimes even when he simply closes his eyes for a moment. He serves as a constant reminder to Shredder of what could await him in his future. Shredder vows to do things right this time, to become wiser and stronger than his old self, so that when the time comes, when he is lord of the afterlife, he will conquer, as he always does.

Cover Subscription (blank).
Add a photo to this gallery 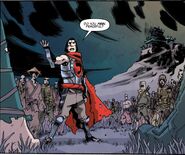 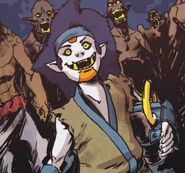 Retrieved from "https://turtlepedia.fandom.com/wiki/Shredder_(IDW_issue)?oldid=507942"
Community content is available under CC-BY-SA unless otherwise noted.