"Shopkeeper" is a recurring minor character in the 2012 TV series. He lives in one of the buildings immediately adjacent to the Foot Headquarters, though does not appear to be in the Foot Clan himself.

"Antonio's Pizza is so good you'll want to obey its every command." 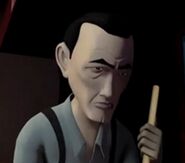 Add a photo to this gallery
Retrieved from "https://turtlepedia.fandom.com/wiki/Shopkeeper?oldid=436312"
Community content is available under CC-BY-SA unless otherwise noted.