The captain of the Shirley's Revenge was a human who commanded an 18th-century pirate vessel. He encountered the Turtles during a period when they were experiencing sudden shifts in time.

During an attack by Rhodes and the Kraken's men, he and his crew were shocked by the appearance of four talking Turtles in samurai armor. After being disarmed and menaced by Raphael, he voiced his intention to leave those waters and not interfere with the Kraken again. However, an impromptu inspirational speech by Michelangelo led to the Turtle being made the new captain on the spot.

The former captain worked for Michelangelo in the days that followed, though he couldn't understand why the Turtle was not afraid. When the Kraken's men attacked once again, Michelangelo was shot off the deck with a laser weapon, temporarily removing him from the fight. The former captain took command again, destroying Rhodes' weapon. engaging him in a sword-fight, and finally punching him to the ground.

After the Turtles vanished, the former captain regained his status and took command of the Kraken's men as well as his own. He ordered the Kraken's ship scuttled immediately, his property on Burnow Island destroyed, and the canisters of ooze and mutagen thrown into a nearby river before departing. One of the mutagen canisters ruptured, exposing and mutating Leatherhead, one of the island's alligators. 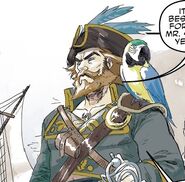 Add a photo to this gallery
Retrieved from "https://turtlepedia.fandom.com/wiki/Shirley%27s_Revenge_Captain?oldid=450329"
Community content is available under CC-BY-SA unless otherwise noted.