Shadow Jones is the stepdaughter of Casey Jones and April O'Neil, and has so far appeared only in the Mirage and Image comics, and every incarnation has been a branch of the Mirage continuity where she was born to Gabrielle Jones, Casey's first wife who died giving birth to Shadow. 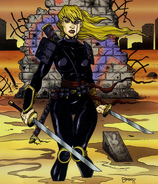