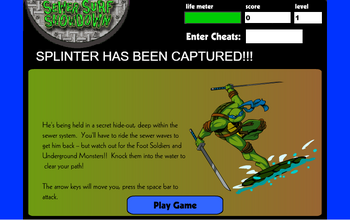 Sewer Surf Showdown is a 2003 Flash browser game based on the 2003 animated series. The plot involves Splinter having been kidnapped by the Foot Clan, and Leonardo going to rescue him.

In the game, players control Leo on a carapace-patterned surfboard. They use the arrow keys to control him, and the Space Bar to attack. However, the game has very poor collision detection, rendering Leo's katana swings almost useless, leaving the game's longevity more up to chance than anything.

Enemies include Foot Ninja and multiples of Razorfist, which are just called "Underground Monsters" and likely just meant to represent the group as a whole, all surfing on manhole covers. Players can restore their life by collecting various food items, such as pizza, hot dogs, french fries, and soda.