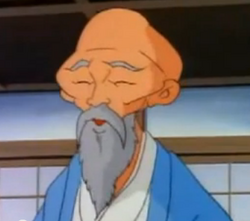 Sensei (先生) is a Japanese word of Chinese origin, literally meaning "one who comes before another" and is used in most cases to mean a teacher or other high-ranking professional of society (lawyers, accountants, clergymen, et cetera). It is also used for someone who makes or creates things (such as craftsmen or mangaka) that is held in high esteem by the speaker or society as a whole. In the Western World, the term is mostly thought of as a term to designate a martial arts teacher exclusively, likely due to the proliferation of martial arts films from the 1960s through the 1990s.

Being a franchise based on martial arts (although sometimes rather tenuously), sensei are plentiful in Teenage Mutant Ninja Turtles. The most well-known, obviously, is the Ninja Turtles' sensei, Splinter.

In addition to being an honorific term of address, "-sensei" is also a naming suffix that replaces the usual address suffix "-san" in this context. For example, in Japanese, "Splinter-san" addresses Splinter as an ordinary person, while "Splinter-sensei" is the equivalent of "Master Splinter." It is rare in TMNT stories for characters to address sensei characters in a suffixed manner like this, but more common in Usagi Yojimbo stories including TMNT crossover stories. In these stories, Splinter's counterpart Kakera is not addressed as "Master Kakera," but as "Kakera-sensei."