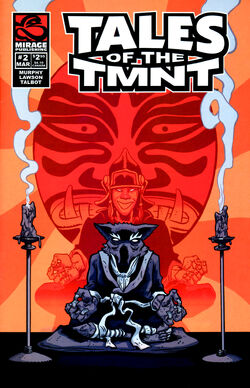 Not to be confused with Ninjara: Seed of Destruction.

Seeds of Destruction is issue #2 of Tales of the TMNT volume 2, published on March 2004 by Mirage Studios.

Sitting beneath a torri, Leonardo ponders that Master Splinter would be very proud of him, as he has made great strides in mastering "the lesson of the bittern". This is the ability to attain perfect calm so as to commune with nature. Now, with all of nature listening, Leonardo decides to tell a story...

Fifteen minutes ago: On a rooftop in New York, a mystic in a meditating position, chews on sunflower seeds and laughs evilly to himself. Down in the lair, Raph and Donnie come home with some loot they got at a junkyard. Leo and Mike have ill-tidings, as Splinter has been trapped in a levitating, meditating position for seven hours, unable to be woken from his trance.

Ten hours earlier: Awoken from his sleep by a noise, Splinter investigates and finds a glowing sphere in the sewers. The sphere transforms into several rocks and attacks him. Splinter dodges, only for the rocks to become shuriken and nearly impale him. Splinter demands to know who his attacker is and the spectral form of the mystic answers that he is Splinter's death. With the challenge issued, the mystic's spirit departs. Splinter deduces that the mystic may be a member of the Foot Clan and that his worst fears are about to be realized.

Eight hours earlier: Pouring over many ancient tomes and scrolls, Splinter tells Mike that he and his brothers have the day off from their studies, but that they must not bother him under any circumstance.

Seven hours earlier: Leo uses the day off to practice, Mike uses the day off to read comics and Raph and Donnie use the day off to go hunting for scrap at a junkyard. Finishing up his studies, Splinter determines that he at last knows what he must in order to meet the mystic's challenge. Taking a lotus position, Splinter performs an astral projection for the first time, detaching his spirit from his body. He follows the trail left by the mystic and confronts him on the rooftop. The mystic is shocked that the old rat could learn such an advanced technique so quickly and counters by projecting his own spirit.

The mystic sends Splinter on a chase through many metaphysical dimensions in an attempt to wear him down, eventually landing in an endless field of sunflowers. The sunflowers fire bullet-seeds at Splinter’s spirit, distracting him long enough for the mystic, now a giant clad in samurai armor, to burst from the soul and snatch Splinter in his hand. Splinter is no easy prey, however and first transforms into many small rats to escape the mystic's grasp, then transforms into rain which cuts a hole in the ground beneath the mystic, plummeting him into darkness. Furious, the mystic grows wings and escapes the hole.

One minute ago: The Turtles gather around Splinter, wondering what they can do. In the astral plane, Splinter counters by transforming into an armored bat and begins out-fighting the mystic. The mystic recognizes Splinter's style as that of the Foot and is confused. Splinter finally defeats him with multiple energy blasts, explaining that his will is greater than the mystics, thus ensuring his victory.

On the rooftop, the mystic's body is curled up in a paralyzed fetal position. Three Foot Mystics (a woman, a warrior and an old man) approach their initiate (Myzoko) and declare that he has failed his final ordeal. They then kick him over the side of the roof where he falls to his death. Leaving, the female Mystic says that one day, they too must face the rat in combat.

In the astral plane, the mystic's spirit dissolves now that his body is dead. Splinter, holding no ill will, tells the mystic to go in peace as his spirit ascends to the heavens. Splinter suddenly awakens in the lair and tells his sons that he is alright... albeit very hungry. Mike offers to make him some dinner and Splinter accepts (with the condition that the meal not contain any seeds).

Retrieved from "https://turtlepedia.fandom.com/wiki/Seeds_of_Destruction?oldid=509880"
Community content is available under CC-BY-SA unless otherwise noted.