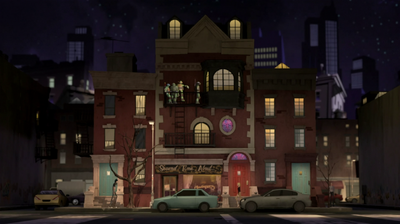 In the 2012 TV series, the Second Time About is a New York City building owned by Kirby O'Neil, containing an antiques store and the apartment he shares with his daughter April.

The interior of the antiques shop itself is never seen during the series, but the apartment and its associated fire escape and rooftop have been visited on numerous occasions. The apartment is entered from a door to the right of the antiques shop, which leads up a staircase to a short hallway leading to the dwelling's living room on the second floor. April's bedroom is located on the third floor, and is usually visited by the turtles from the outside on the fire escape. The rest of the apartment's interior has never been shown.

The Second Time About makes its first appearance in Rise of the Turtles, Part 1 and Part 2, when the turtles are trying to save April and her father from mysterious attackers. The turtles save April, but Kirby remains kidnapped, and April's aunt lets her continue living in the apartment alone. Kirby would not be rescued until Operation: Break Out.

In New Girl in Town, Leonardo visits April's building window to tell her about meeting Karai.

In The Mutation Situation, Kirby accidentally mutates into a bat, loses most of his human faculties and flies away, leaving April again living alone in the apartment until Kirby's successful retromutation in The Lonely Mutation of Baxter Stockman.

During The Invasion, Part 1 and Part 2, the lair of Splinter and the turtles is discovered by Kraang Subprime and invaded and ruined by the Kraang, forcing Donatello and Michelangelo to seek refuge in the O'Neils' apartment where they are soon joined by Raphael and Casey Jones. But the Foot Clan overwhelms and brutally defeats Leonardo at an urban construction site and use his T-Phone to learn that the rest of the turtles are hiding in the Second Time About building. They throw the turtle through the apartment's living room window and swiftly invade the building, forcing all its inhabitants to flee. Kirby mutates a second time and the turtles flee the city with April and Casey, leaving the building unoccupied while the Kraang occupy the city.

After the events of Battle for New York, April and the again-retromutated Kirby move back into their apartment.

In The Deadly Venom, Karai breaks into April's bedroom during the night and poisons her with a snake bite.

The building must again be fled as the entire planet Earth is destroyed by the Heart of Darkness in Annihilation Earth!, Part 2. 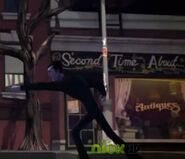 Add a photo to this gallery
Retrieved from "https://turtlepedia.fandom.com/wiki/Second_Time_About_(2012_TV_series)?oldid=461343"
Community content is available under CC-BY-SA unless otherwise noted.