Screwloose is a mosquito in most of his appearance except for one version where he is a batfly. In each of his appearances, is a comrade of Wingnut. He's been presented as both an ally and an antagonist of the Teenage Mutant Ninja Turtles depending on the incarnation.

Screwloose
IDW
Add a photo to this gallery 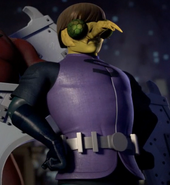 Screwloose
2012 TV series
Add a photo to this gallery

Wingnut & Screwloose
1990 release
Add a photo to this gallery
Retrieved from "https://turtlepedia.fandom.com/wiki/Screwloose?oldid=265194"
Community content is available under CC-BY-SA unless otherwise noted.