In the IDW continuity, the clan known colloquially as the Savate Ninja are a band of criminals originating from France. Their name is given due to their clandestine ninja-like garb and their fighting style, a form of French kickboxing. They actively oppose the Foot Clan, but they are also an enemy of the Turtles.

The Savate ninjas became very prominent in the criminal underworld, becoming second only to the Foot in power. They were not content to be subordinate to the Foot, unlike many other criminal elements such as the Mafia, which led to extensive and deadly conflicts during the City Fall arc, since only one organization could ultimately be triumphant.

At that time, the Savate Ninja attempted to to steal a shipment of equipment being delivered by Karai and her fellow Foot Clan ninja. The Savate were about to finish off the Foot when a brainwashed Leonardo shows up with more Foot ninja, who disposed of all but one Savate, letting him go free to relay a message to his leader Victor. However, Victor was unreceptive to this message, even when the head of the Mafia expressed his displeasure over the escalating war between the ninja clans.

However, the Savate came to an ignominious end shortly thereafter. While at their base, the Savate found themselves ambushed by the Foot Clan who are being led by Leonardo. Victor and the remainder of his clan were captured and subsequently brought to an abandoned theatre, as part of a meeting the Shredder was holding with the various criminal organizations in New York City. During the meeting the Shredder made an example of Victor and the Savate Ninjas by decapitating their leader. They have not been seen or heard of since, indicating that the Savate clan is now completely defunct. 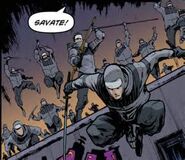 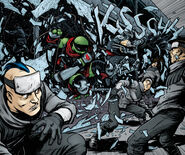 Add a photo to this gallery
Retrieved from "https://turtlepedia.fandom.com/wiki/Savate_Ninja?oldid=498758"
Community content is available under CC-BY-SA unless otherwise noted.