The Sai is a defensive truncheon originating in Okinawa. It is often mistaken for a dagger, as its use in the TMNT media would reflect. Several characters in the series have used sai, but they are mostly associated with Raphael.

In traditional sai combat, they are carried in pairs, called saitachi. One is used for blocks and trapping weapons, while the other is used for striking, mostly with the knuckle. 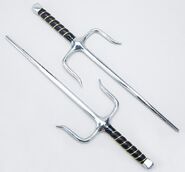 Back To The Sewer cyberspace