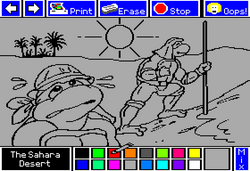 The Sahara (الصحراء الكبرى‎, the Greatest Desert) is a desert located in Northern Africa and is the third largest desert in the world. It is often colloquially referred to as The Sahara Desert, although Sahara derives from the Arabic word which means desert.

The Sahara is one of the locales the Turtles in Teenage Mutant Ninja Turtles: World Tour visit during their world tour. Both Turtles pictured wear keffiyeh ; the one in the foreground is sweating, while the other one walks briskly with a large walking stick.

Retrieved from "https://turtlepedia.fandom.com/wiki/Sahara?oldid=513047"
Community content is available under CC-BY-SA unless otherwise noted.