Rocksteady is the other half to Shredder's B team. Transformed into a mutant rhinoceros, he's twice as ugly as he is dumb. But one thing's for certain, Rocksteady always finishes last. My man! 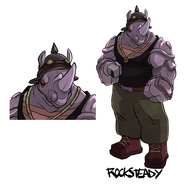 Add a photo to this gallery
Retrieved from "https://turtlepedia.fandom.com/wiki/Rocksteady_(2014_video_games)?oldid=516685"
Community content is available under CC-BY-SA unless otherwise noted.