Rocksteady's tough rhino body makes him a turtle-bashing powerhouse. His lack of smarts makes him dangerous. This mutant mammal is big trouble with his Retro-Mutagen Gun: one shot can level a whole building or a shelled turtle. Off-duty, Rocksteady loves to fry up a mess of juicy turtle burgers for the whole hungry Foot Clan.

Rocksteady's fieldglasses survey the area for anything that looks like a Turtle. (He's mistakingly blasted six soccer balls). This G.I. rockhead blatantly displays his victory kills with the turtle scalps he wears around his belt. 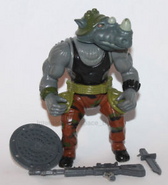 Rocksteady out of card with accessories 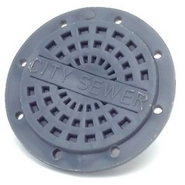 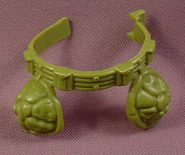 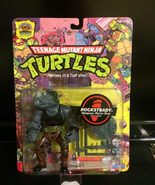 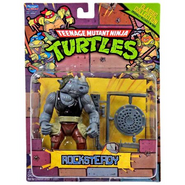 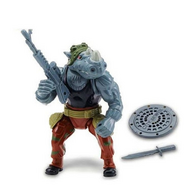 2015 reissue out of card (prototype)
Add a photo to this gallery
Retrieved from "https://turtlepedia.fandom.com/wiki/Rocksteady_(1988_action_figure)?oldid=532013"
Community content is available under CC-BY-SA unless otherwise noted.