The Rock Soldiers are stone beings from Dimension X with regenerating abilities that are used as guards by The Kraang.

A stone warrior (presented in official sources as Traag) occurs in the 2012 animated series as an ally of the Kraang. However, in this version, he is a gigantic creature of at least six meters in size, whose body interior is composed of pure lava.

In a later encounter Granitor was also introduced representing another sub-genre of rock warriors, which have a silvery-white rocky body and the ability to emit blue flames. Finally, it is presented at the end of the series, a further, low-ranking type of rock solider. 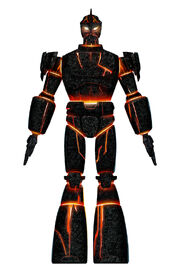 Add a photo to this gallery
Retrieved from "https://turtlepedia.fandom.com/wiki/Rock_Soldiers_(2012_TV_series)?oldid=487345"
Community content is available under CC-BY-SA unless otherwise noted.