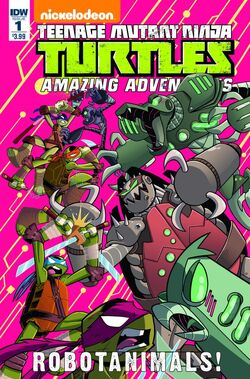 Baxter Stockman is looking to become the new major villain on the streets! His first step to world domination? Turn the Mutanimals into robots!!

After running out of Mutagen, Baxter Stockman develops a series of nanobots which react when exposed to Mutant DNA and will bond with the subject, transforming them into a robotic version of themselves. He tests this new invention with success on Antrax and Scumbug.

After deciding that his old teammates at the Foot Clan may be too hard to capture and utilize the nanobots on, he goes to the Mighty Mutanimals and feigns a change in loyalty. While the Mutanimals debate on whether to believe Stockman, the Ninja Turtles arrive with Pizza and attack him. Slash calls them off an the two teams discuss Stockman's alleged change of heart, which the fly uses to ambush the Mutanimals with the nanobots, transforming them all into, as Michelangelo calls them, "Robotanimals".

The nanobots have overwritten the Robotanimals' willpower, so they attack the Turtles. Donatello suggests hitting them with an EMP, but Raphael is not fond of the idea, saying that it would wipe out their "robo-brains". Mikey suggests instead luring them to a glue factory. The Turtles dump barrels of glue on them, but the Robotanimals shatter the glue and beat down the Turtles, leaving Stockman to gloat.

by Billy Martin
Add a photo to this gallery
Retrieved from "https://turtlepedia.fandom.com/wiki/Robotanimals!_issue_1?oldid=517748"
Community content is available under CC-BY-SA unless otherwise noted.