Road Hogs is the second Teenage Mutant Ninja Turtles & Other Strangeness supplement set in the post-apocalyptic After the Bomb future. It was published by Palladium Books in October 1986 and uses the Palladium Megaversal system.

The storyline of After the Bomb introduced a post-nuclear warfare setting centered around the eastern United States, where most of the area is populated by mutated animals that form the predominant societies, as opposed to the setting of Teenage Mutant Ninja Turtles & Other Strangeness where mutants live on the fringes of contemporary human society. Road Hogs expands that setting to include the western United States, which is largely controlled by vicious gangs of mutants in heavily modified vehicles, scavenging for their existence. It is reminiscent of the movie The Road Warrior.

The book outlines many new rules for the operation of vehicles and acquisition of resources in a bleak wasteland setting, as well as several adventure scenarios. These include road maps of Southern and Central California that indicate where the various factions and gangs occupying the region are located. Most of the civilized mutants and humans are located in what was previously known as Sacramento, California.

The book is also noted for its original artwork by Teenage Mutant Ninja Turtles co-creator Kevin Eastman, which has not been reproduced in other books from Palladium.

Notably a comic in the back of the supplement by Erick Wujcik, Kevin Siembieda, and Brent Carpenter features a group of mutant turtles trained in the ninja arts who stand against the Road Hogs Gang of marauders. There is notable a TMNT poster on the wall, and a mysterious slightly senile turtle elder who absent-mindedly calls his pupils "Mike".

Eventually when the student turtle ninjas are overpowered by the outlaw hogs, their master leaps into the fray wielding a pair of sai. This strongly indicates that this is an ancient Raphael (still alive far in the future) and that all he clings to is his fond memories of his brother Mike. 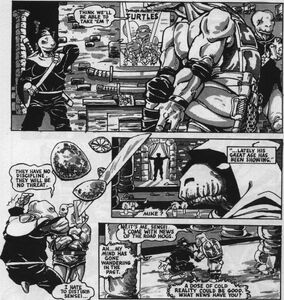 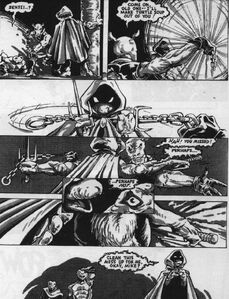 Retrieved from "https://turtlepedia.fandom.com/wiki/Road_Hogs?oldid=507003"
Community content is available under CC-BY-SA unless otherwise noted.