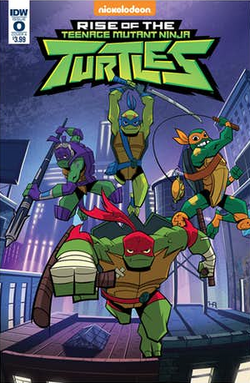 Rise of the Teenage Mutant Ninja Turtles is a comic book series based on the animated series of the same name, published by IDW Publishing. Unlike most comic book adaptations, but like New Animated Adventures before it, it is considered canon to the series, with issue 0 serving as a prequel to the show, and any inconsistencies between the two are the results of error or retroactive continuity ("retcon").

Retrieved from "https://turtlepedia.fandom.com/wiki/Rise_of_the_Teenage_Mutant_Ninja_Turtles_(comics)?oldid=518091"
Community content is available under CC-BY-SA unless otherwise noted.