After Splinter was badly wounded in a battle with Bane, Nightwing and Batgirl accompanied Raphael and Robin to the Lazarus Pit, in hopes of restoring Splinter to health. Afterwards, Nightwing traveled to the Turtles' home dimension in order to help Batman stop Bane. He fought alongside the Turtles at the Statue of Liberty, ultimately battling Bane and helping bring him down. He then accompanied Batman and Batgirl back to their home dimension, with the captive Bane. 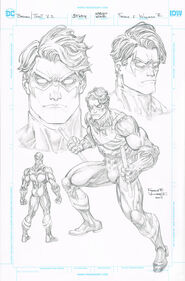 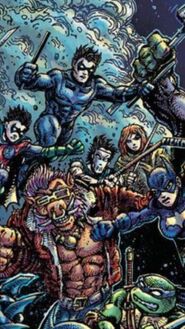 Add a photo to this gallery
Retrieved from "https://turtlepedia.fandom.com/wiki/Richard_Grayson_(Prime_Earth)?oldid=491921"
Community content is available under CC-BY-SA unless otherwise noted.