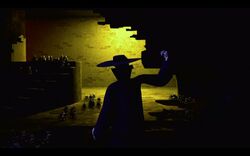 The Rat King's lair is a location appearing in the 2012 TV series. Located in an abandoned utility junction beneath Harold Square, it is surrounded by abandoned sewer tunnels, creating the perfect environment for Dr. Victor Falco conduct his unethical biological experiments and create his formidable rodent legion.

The Rat King's lair appeared in all of the episodes that feature Dr. Victor Falco, except for "Monkey Brains".

Add a photo to this gallery
Retrieved from "https://turtlepedia.fandom.com/wiki/Rat_King%27s_lair_(2012_TV_series)?oldid=466391"
Community content is available under CC-BY-SA unless otherwise noted.