Rasputin the Mad Frog is one of the Punk Frogs. He is named after one of Shredder's favorite historical figures, Rasputin the Mad Monk. He was created in the same manner as his three brothers, Attila the Frog, Genghis Frog & Napoleon Bonafrog, when Mutagen sent by Krang landed near four frogs in a Florida swamp.

He was a humble, naive tadpole, until he was accidentally mutated, then tricked by The Shredder to join his cohorts for evil purposes. However, when the Frogs were frozen by Captain Hoffman and his Anti-Turtle Force, the Turtles took them back to their lair and defrosted them, and Splinter implored that they show the Frogs compassion. When he saw Shredder's evil ways, Rasputin realized that the Turtles were his true friends. The Frogs then double-cross Shredder and set him up by telling him the Turtles hid the final component of the Mutagen he needed in Stonewall Prison.

Instead, the Turtles ambushed Shredder and his goons. Through his tracking device Hoffman located the Turtles again and landed in a helicopter with some of his men on the roof of the prison. But thanks to Rasputin's exploding arrows, they were able to blow a hole in the floor and escape.

Along with the other frogs, Rasputin chose to return to his swamp. 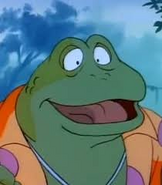 Retrieved from "https://turtlepedia.fandom.com/wiki/Rasputin_the_Mad_Frog_(1987_TV_series)?oldid=543677"
Community content is available under CC-BY-SA unless otherwise noted.